All Vikings deserve MMA rash guards that not only look awesome but have a function to them as well. The top common function for a good quality rash guard is that they keep the sweat off while keeping everything very close to your skin. Most like a rash guard that allows the grappler a healthier roll while helping the movement of the fighter. Throughout the years the modern rash guard has gone through a lot of changes. The top rash guards, like ours, are made from a special printing design making it a long lasting design that will not fade or peel. Separate from them looking cool, the compression wear is made to compress your muscles and strengthen them. This makes it so fighters can recover faster while being able to roll longer. It has been scientifically proven that compression guard can increase the recovery of muscles after an intense workout.  MMA rash guards are made of a material that wicks the moisture that is commonly built up during performance. This will keep your grappling game as sticky as ever.

Berserkers were a group of special elite Viking warriors who went to battle without traditional armor so why go with the average cheap MMA rash guards most everyday joes use? Do not worry we have the Berserker Rash Guard.

Lately, these rash guards have been flying out the doors at our gyms so it has been about time that we have them online. This specific type of Rash Guard has been sold out for a while so when we have them it is important to get them while they are fresh on the market. This rash guard is stitched together with the Viking Gear reinforced stitching. This allows it to be fit and comfortable. The blend of materials makes it able to be used as a thermos-regulated outwear. The Berserker Rash Guard cools you down when you are hot and keeps heat in as well. Like all top quality MMA rash guards, this one is made with the special printing process that will keep an everlasting print for all your battles! You can also wear this under your gi. 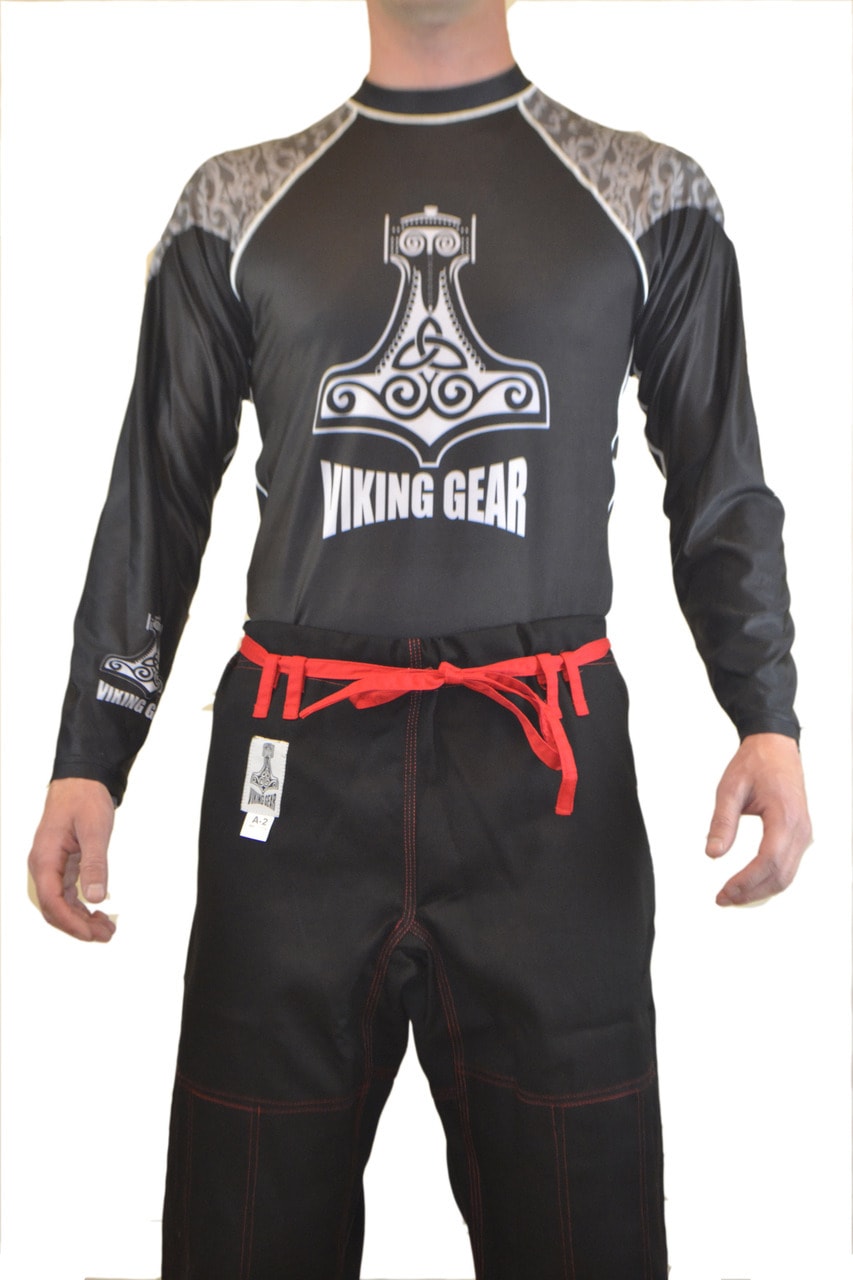 Although this is not exactly made of Asgardian Steel and inscribed with the sacred Runes of Odin, this is still one of the top MMA rash guard that is made for the best protection for your upper body on your conquest! This also makes for a great kids mma rash guards.

This popular rash guard is made with Viking Gear reinforced stitching methods that create some of the best mma rash guards for any fighter. This gear is both flexible and comfortable.At the same time, it is similar to the Berserker Rash Guard because of its use as a thermo-regulated outwear. It is also made with the special printing keeping your reminder of Thor’s Armor protection forever on your shirt.  This is great for no gi rolling or simply wearing under your gi. Get this extremely popular rash guard as soon as possible! 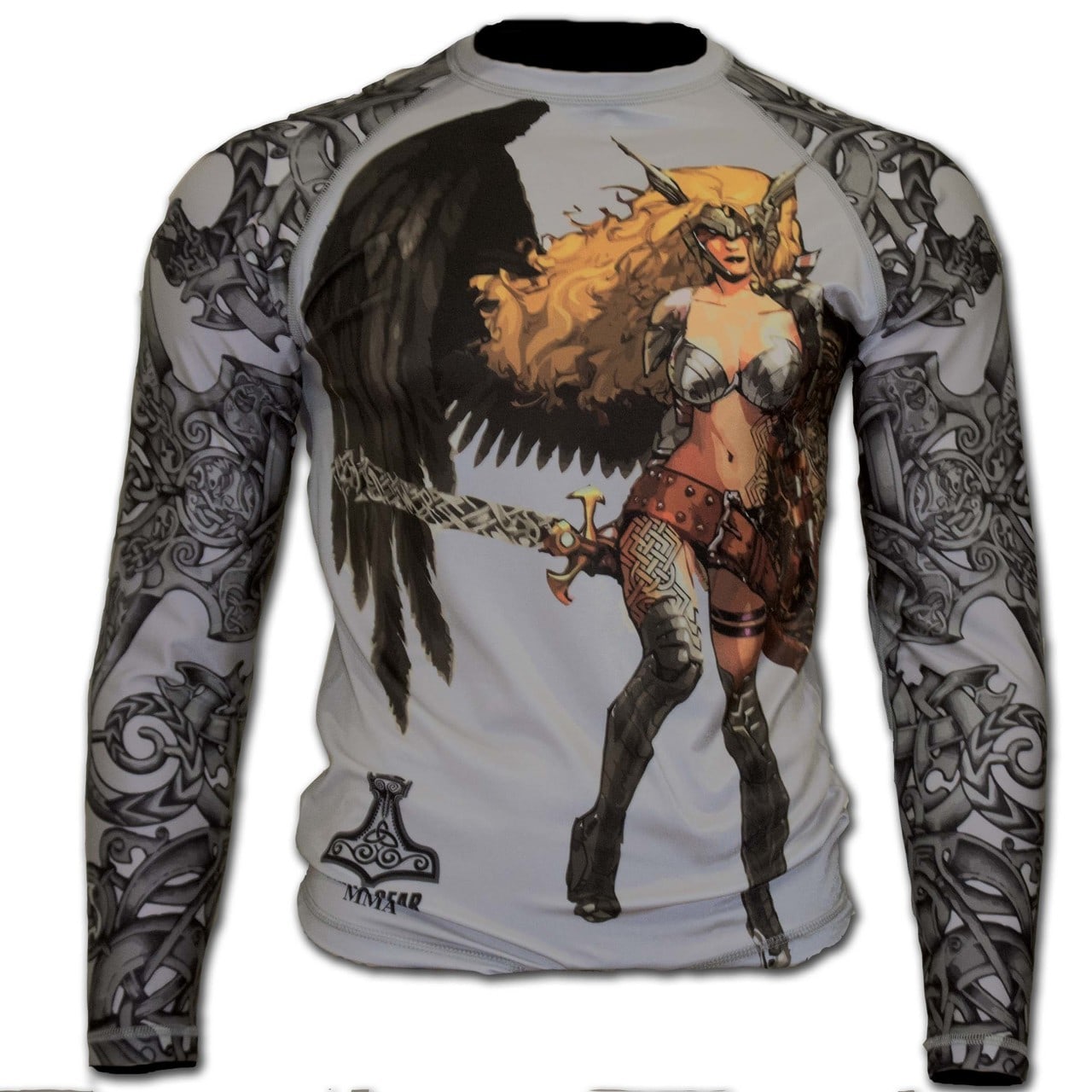 "Soon I shall be drinking ale from curved horns. This hero that comes into Valhalla does not lament his death! I shall not enter Odin's hall with fear. There I shall wait for my sons to join me. And when they do, I will bask in their tales of triumph. The Aesir will welcome me! My death comes without apology! And I welcome the valkyries to summon me home!"

Each piece has been beautifully designed with intricate designs and print all in the name of Valkyrie. All of them have been in high demand so get them while they are hot.  Designed with Viking Gear reinforced stitching methods to create comfort and flexibility. Every Valkyrie piece can be used as a thermos- regulated outwear. This means they all help keep heat in as well as keeping a warrior cool when in hot situations. The intricate designs are made to never fade or lose its crisp look. All Valkyrie rash guards come with a one-year VikingTough Warranty, making it a win-win deal! 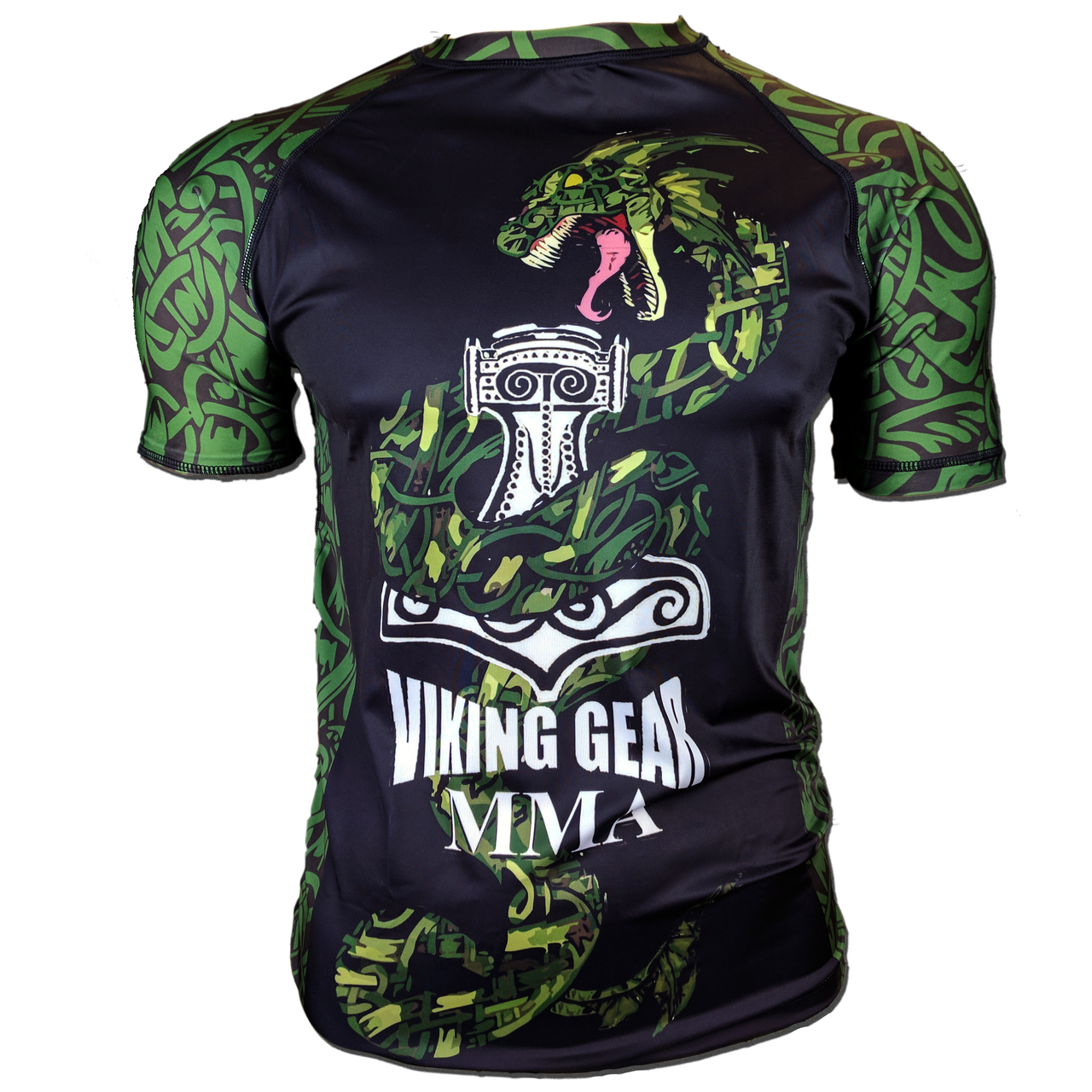 Be as tough as the Jörmungandr in one of our Midgard Serpent Rash Guards. Jörmungandr, the Midgard Serpent, is known as a child of the Norse God of mischief and trickery, Loki.  The Midgard Serpent was sent away by Odin into the ocean. That is where she grew so big that even with her tail in her mouth she surrounded the whole entire world. With the churnings of her coils, she created tsunamis and tempests that drowned many sailors. When she releases her tail Ragnarök, the great battle will begin.

Each one is designed with a special printing process that will allow a long lasting and never fading design no matter how treturous of battle you may encounter.  They are all also made with the strongest most durable Viking Gear reinforced stitching method. They are breathable, fit and comfortable no matter what size of Viking you may be.  This is also made out of material used as a thermos-regulated outwear. Keeps heat in and keeps you cool as well. 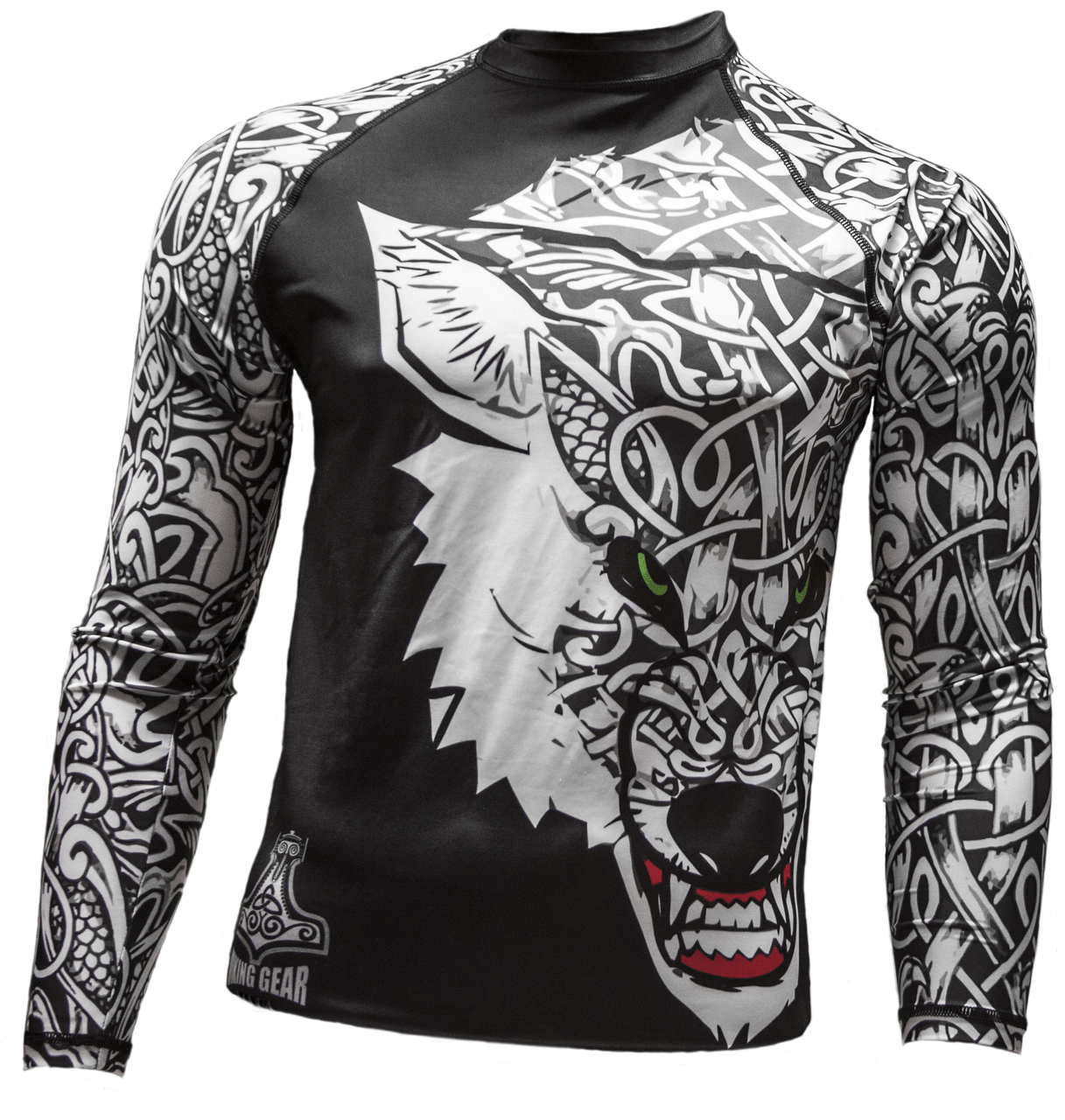 The detailed piece of art is available for all but going fast! The reason being that it is made with some of the strongest material known in the MMA industry, with the Viking Gear, reinforced stitching method it is strong, reliable, and flexible.  This means that this rash guard will not be getting messed up only after a couple rolls but will continue to stay maintained for outwear.  These guards are a nice clean looking design that makes a statement while settling enough to wear under your gi! Fenrir Rash Guards are also used as a thermos-regulated material retaining heat and keep a fighter cool as well. Get them while they are in stock.