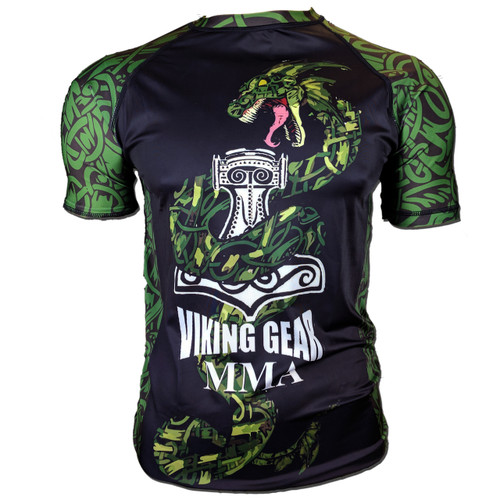 Bring Ragnarok to your gym.  Jormungand, the Midgard Serpent, was one of three children fathered on the giantess Angroba by Loki, the Norse god of mischief and trickery. The others were Fenris the wolf and Hel, which means Death.

The Midgard Serpent was cast by Odin into the ocean where he grew so huge that with her tail in her mouth she soon encompassed the whole world, and the churnings of her coils raise the tsunami and tempests that drown sailors. When it releases its tail, Ragnarök will begin

The rash guard is designed with Viking Gear reinforced stitching method to provide both comfort and fit. The material blend makes it so it can also be used as a thermos-regulated outwear retaining heat when needed and cooling you down when you are hot. The design is made using a special printing process makes the design last without ever fading or losing its sharpness. This is perfect for no gi rolling  or to wear under your gi! Get them while they last.